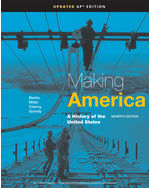 Written inclusively for the AP® U.S. History curriculum, the updated 7th edition of Making America is an approachable text with plenty of AP® features, and AP® assessments and includes changes recently made to both the AP® U.S. History course framework and the exam. Making America brings people, places, and events to life through maps, paintings, photos, and cartoons as well as the written word. Making America speaks in a voice intended to communicate with rather than impress. The authors encourage readers to draw their own conclusions about the causes and consequences of individual choices, public policies, political decisions, protest, and reform. The book offers a full array of integrated and supportive learning aids to help students at every level of preparedness comprehend what they read.

This resource helps instructors teach the course in order to prepare students for AP™ exams.