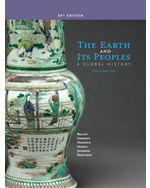 The Earth and Its Peoples

Featuring a beautiful new design, THE EARTH AND ITS PEOPLES, Sixth Edition, presents world history in a balanced, global framework, shifting the focus away from political centers of power. This truly global text for the world history survey course employs fundamental themes of "environment and technology" and "diversity and dominance" to explore patterns of humans' interactions with their surroundings and with each other. The authors' approach reveals how humanity continues to shape and be shaped by the environment and how dominant structures and traditions are balanced and challenged by alternate beliefs. Special emphasis is given to technological development and how it underlies all human activity. Highly acclaimed in their fields of study, the authors bring a wide array of expertise to the program. A combination of strong scholarship and detailed pedagogy gives the book its reputation for rigor and student accessibility.